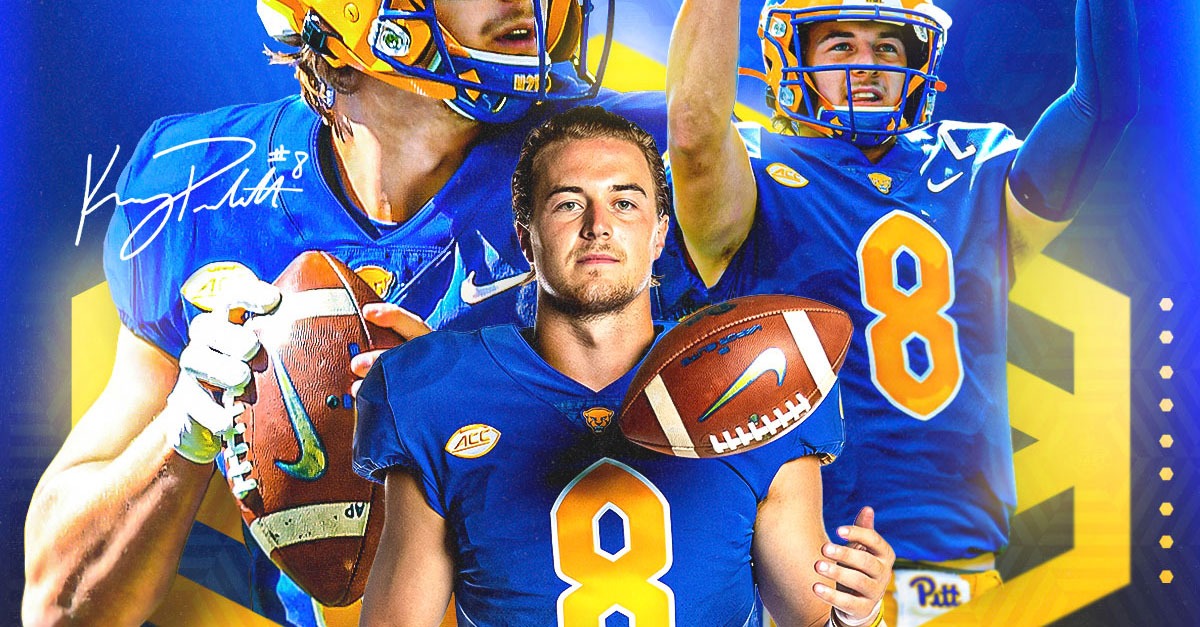 Record-setting Pitt quarterback Kenny Pickett, a 2020 College of Business Administration graduate, was chosen as the first quarterback in the 2022 NFL Draft with the selection by the Pittsburgh Steelers.

Pickett, who has a degree in marketing and was pursuing his master’s degree in the Joseph M. Katz Graduate School of Business before entering the NFL draft, has been a leader on the football field and in the community. The quarterback led the Panthers to the 2021 ACC Football Championship, finished third in the Heisman voting, and was a finalist for the national Senior CLASS Award, which encourages students to use their platform in athletics to make a positive impact as leaders in their communities.

Pickett’s approach reflects the Pitt Business mission: We prepare our students to take business beyond the classroom and be catalysts for change. Kenny is joining with other Pitt Business students and alumni who are finding creative ways, large and small, to help others and improve society.

“In Kenny Pickett, the Steelers are not only getting a tremendous quarterback, but also one of the finest leaders and toughest competitors I’ve ever been around,” Pitt head coach Pat Narduzzi said. “I have no doubt he wants to leave his draft party right now and get to work on the playbook with Coach Tomlin and Coach Canada. That’s the type of commitment Kenny displayed at Pitt and will continue to have next door. Beyond the field, Kenny is already such a wonderful asset for the Pittsburgh community. He greatly values the importance of giving back as he showed with his NIL efforts. This is just a huge victory for the Steelers and Pitt.”

The NCAA’s new name, image, and likeness (NIL) policy enabled student-athletes to pursue sponsorships and, for some, to give back in the community. Pitt’s Athletic Department introduced “Forged Here,” in collaboration with the Center for Branding at Katz and other partners, to equip student-athletes with the knowledge and resources necessary to maximize their brand and platform.

Pickett’s NIL partnerships include collaboration with a trucking company and an apparel company to produce “Pickett’s Partners” T-shirts. All proceeds are given to another partner – the Boys & Girls Clubs of Western Pennsylvania. Growing up in New Jersey, he spent many days at one of the non-profit’s locations. Now as a NFL prospect, he visited summer day campers at a Pittsburgh location and distributed T-shirts to the starstruck children.

“I take a lot of pride in being a quarterback at the University of Pittsburgh,” Pickett said in a Nov. 11, 2021, story by ESPN. “It branches out farther than just the team. With the NIL opportunities, I think there are ways that I can get involved in the community so I’m excited to keep going with it.”

His Pitt teammate, left tackle Carter Warren, added: “There are a lot of people out there in need and Kenny is doing everything he can to lift them up.”

To be eligible for the NCAA Senior Class Award, a football student-athlete must be classified as senior or graduate student and have notable achievements in four areas of excellence: community, classroom, character and competition. The winner from among 10 nominees, including Pickett, will be announced at the end of December 2021.

“Kenny is an example of what the term student-athlete means,” Scott Koskoski, a Boys and Girls Club vice president, said to the Pittsburgh Tribune-Review in an Aug. 9, 2021, article. “Sports, yes, but it’s also in the context of being a good person with great character, not forgetting where you came from. It’s not just talking about being a good community partner, but it’s also doing something about it.”