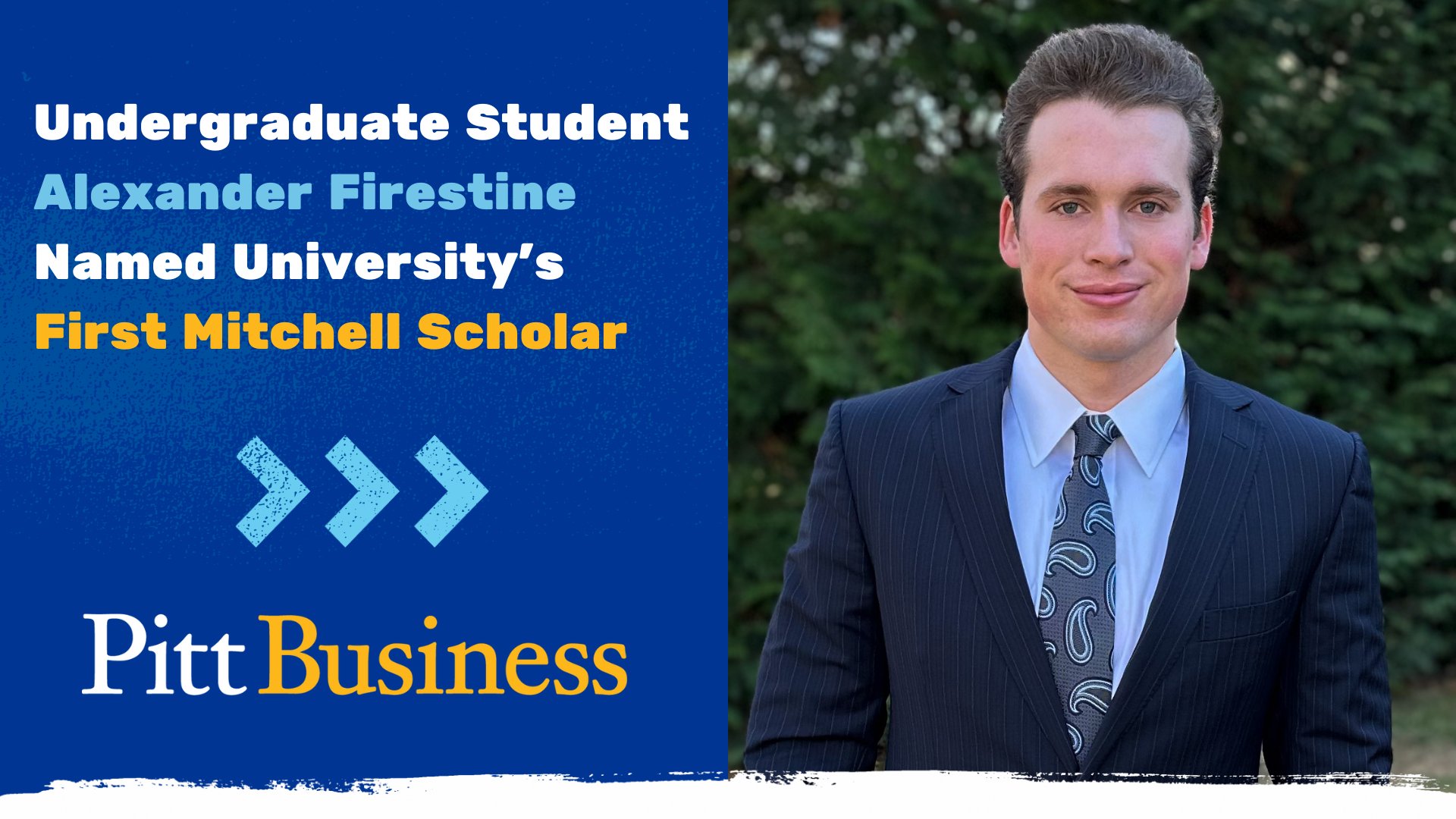 PITTSBURGH – Alexander Firestine, a senior studying finance, accounting, and business information systems at the University of Pittsburgh, has been named a George J. Mitchell Scholar. He is the University’s first-ever recipient of this prestigious national scholarship, which sends future American leaders to Ireland for a year of graduate study.

Firestine, a resident of Germantown, Maryland, is among the 12 Class of 2024 scholarship recipients chosen from 306 applicants. The Pitt Business undergraduate and David C. Frederick Honors College student, plans to study climate change, agriculture, and food security at University of Galway.

Firestine, a recipient of Pitt’s prestigious Chancellor’s Scholarship, has focused on food insecurity and how data analytics can alleviate the problem. At nonprofit Food21, he co-led a project that developed a digital tool using data to measure regional food insecurity and identify areas where food apartheids may exist in Pittsburgh. During the pandemic, he personally arranged for the delivery of more than 10,000 meals.

“Congratulations to Alex for making history as Pitt’s first Mitchell Scholar and also thank you for taking what he’s learning in the classroom to make a major impact in the community,” said Lawrence Feick, interim associate dean of Pitt’s College of Business Administration. “We are proud of his entrepreneurial spirit, dedication to helping and others, and his commitment to address some of society’s biggest challenges.”

Other accomplishments by Firestine include the design of a University-accredited extracurricular institute that now teaches analytics to 300+ students as a core class and led an organization of more than 120 members who teach entry-level workshops for data programs like Python and Tableau.

“This award is life changing for me,” said Firestine. “It provides me with the opportunity to explore my passion for social impact and food security and opens the door for me to engage in future research in the food security space on an international scale.”

The Mitchell Scholars Program is named in honor of George J. Mitchell, the former U.S. senator who served as chairman of the peace negotiations in Northern Ireland. Under his leadership, the Good Friday Agreement, a historic accord ending decades of conflict, was agreed to by the governments of Ireland and the United Kingdom and the political parties of Northern Ireland.

About the US-Ireland Alliance

The US-Ireland Alliance is a proactive, non-partisan, non-profit organization dedicated to consolidating existing relations between the United States and the island of Ireland and building that relationship for the future. The organization connects current and emerging Irish and American leaders in various spheres—including education, politics, business, and the arts—for the mutual benefit of both countries.