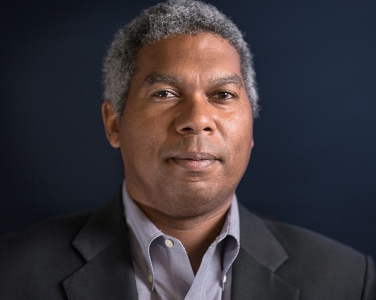 In his eight years with the University, Harper has achieved vastly more in the Pittsburgh community than most can achieve in their careers. His career exemplifies a unique blend of teaching and mentoring with a strong record of public service, inclusive innovation, global venturing, and social entrepreneurship.

“As a new Black professional to the City of Pittsburgh, Paul immersed himself in our city’s cultural and social organizations,” says Arjang A. Assad, Henry E. Haller Jr. Dean. “This environment allowed him to use his doctoral research which had focused on how Black entrepreneurs have been marginalized in literature, thereby losing opportunities to shape meaningful public policy. Paul set out to remedy this by finding ways to link his work in the community back to the business school.”

Harper’s community service is exemplified by his ability to forge partnerships between the classroom and the community. Through his research and findings, Harper sought out local Black entrepreneurship leaders to discuss ways to connect that ecosystem to Pitt Business.

This led to his invitation to join the City of Pittsburgh’s Equal Opportunity Review Commission (EORC). The EORC serves as the oversight mechanism for the city’s contracting activities and conducts due diligence to determine whether any specific contract over 50,000 dollars meets the desired diversity participation levels of women and minority companies. His role on the EORC enabled Harper to build strong relationships with Black business networks, such as the African American Chamber of Commerce, that he subsequently leveraged in his teaching and experience-based learning offerings.

He has been the driving force behind a new undergraduate course focused on race and business ethics at Pitt Business, as well as a series of presentations by top business scholars that examine issues of racial justice at the intersection of business and society.

After the death of George Floyd and the waves of protests that followed in 2020, Harper was moved to use his position to expand understanding of racial justice—both among business students who will be tomorrow’s leaders, and among colleagues in the field. As one of very few Black business school faculty members nationwide, he felt a personal responsibility to step forward and show leadership.

“Since the murder of George Floyd, there has been a consistent effort by people who are looking for a moral evolution,” says Harper. “I am heartened by that—and young people are at the lead. I want to have these conversations. These are the people who are going to move this world forward.”

He believes that a deeper understanding of racial justice is increasingly important to business students’ success.

“For corporations and the schools that are tasked with training their management and leadership ranks, the strategic implications are clear: As much as this is about Black and White, about good and bad, and about right and wrong, it is also about winning and losing,” says Harper.

“Moving forward, corporations will need new leadership who are trained to understand, recognize, and affirm calls for social justice emerging from the stakeholder ranks, and there will be fierce competition for the alumni of those schools who can provide that kind of strategy and business ethics training.”

Harper continues to be a champion for social justice and public service—and never fails to bring his work in the community back to the University.

“Paul’s dedication to the Pittsburgh community instills valuable lessons in his students about the link between a university and the community in which it resides,” says Assad. “I firmly believe that these lessons will continue to resonate with his students as they enter and make progress in their business careers.”