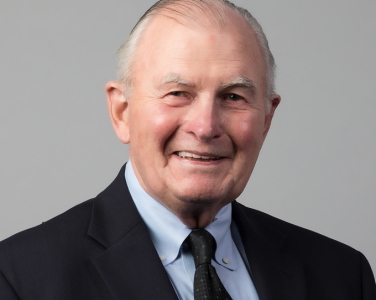 Andrew Blair is currently professor emeritus of business administration and of economics in the Katz Graduate School of Business and College of Business Administration, having joined the School’s faculty in 1971. From 1999 to 2012, he served as the University’s vice provost for faculty affairs. During 1996-97, Blair served as interim dean of the Katz School/CBA. Earlier (1971-89), he served as associate dean and then executive associate dean of the Katz School. From 1989 to 1999, he was the founding director of the School’s International Business Center.

Before joining the University’s faculty, Blair was at Fordham University for a number of years, serving at various periods as acting dean of the College of Business Administration and vice chair of the Department of Economics. During part of 1969, he served as an economist in the Foreign Research Division of the Federal Reserve Bank of New York. While on sabbatical from the University of Pittsburgh during 1976-77, Blair was a visiting scholar/professor in the Department of Political Economy, University College Dublin, National University of Ireland.

Blair’s teaching and research interests have focused on managerial economics, international economics, macroeconomic analysis and forecasting, and the relationship of international trade to the process of direct investment by multinational corporations. He has published in such journals as Oxford Economic Papers, European Economic Review, Review of Economics & Finance, Socio-Economic Planning Sciences, the National Tax Journal, and Economia Internazionale, and has also contributed to edited scholarly monographs.

During the 1990s, Blair was significantly involved in central Europe’s transition to market-oriented economies, serving as one of the Katz School’s principal representatives to two of the new western-style management programs it helped to found in the region, as well as project director on two large USAID grants in support of those programs. He formerly served as chair of the Western Pennsylvania District Export Council (appointed by the U.S. Secretary of Commerce). He is a former treasurer and member of the executive committee of the Board of Directors of the Council on International Educational Exchange. Blair has also served as a consultant for a wide variety of profit and not-for-profit organizations in the areas of strategic planning and regional economic development.

Gold Medal for service to the Master of Business Administration Program at the Faculty of Management, Comenius University, Bratislava, Slovakia, December 2000.

“Forecasting the Resurgence of the U.S. Economy in 2010: An Expert Judgment Approach,” with G. N. Mandelker, T. L. Saaty, and R. Whitaker, Review of Economics & Finance, Volume 5, Issue 2 (2015), based on the original paper below (September 2010), including an updated postscript setting forth what transpired after that original forecasting exercise was concluded.

Whenever feasible, Blair likes to spend time at his house in Avalon, N.J., bicycling and taking long walks on the beach.